Brilliant – the first and highest skyscraper in Khabarovsk and the Far East Region, with the height of 62 floors and 235 meters. The building will have 5 underground levels. The project is currently at the design stage. The building has a congress hall, a hotel, spa area, a fitness center, a supermarket, a parking for 1900 car slots. The underground tunnel runs through the underground part of the building.

The skyscraper will be located at the intersection of Lenin and Kalinin Streets in the Central District of Khabarovsk.

The probable operator of the hotel for 300 rooms is Radisson Blu 4 *. The hotel lobby has a double ceiling height with panoramic views.

The project included solutions for: 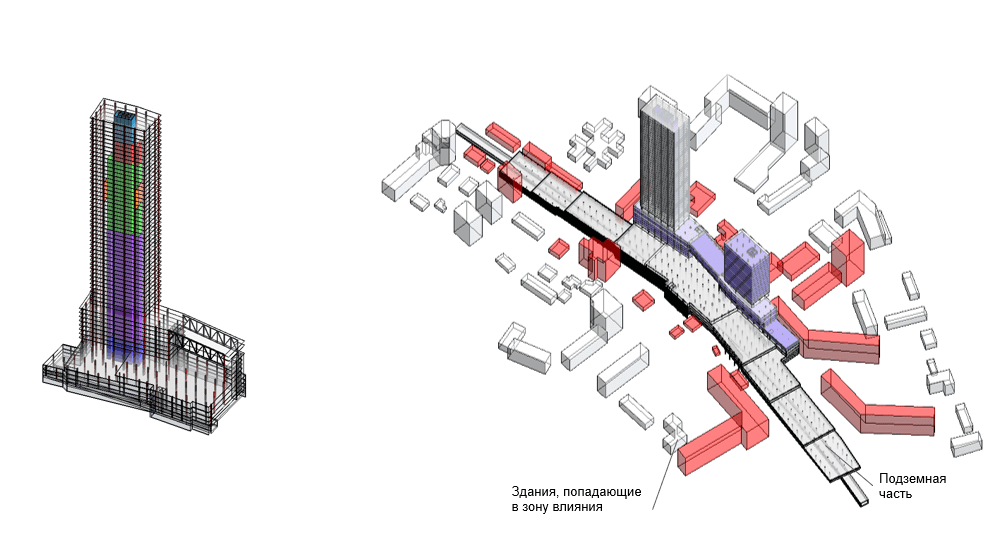 Piс. 1 Analysis of the impact of new construction on existing buildings and communications

In cooperation with the architects, Clancy Engineering engineers  developed a general concept for the master plan and a transport scheme in several versions, in accordance with the specifics of the object, the architectural idea, the existing buildings, the transport infrastructure, the existing relief, as well as Client’s tasks and wishes. A thorough analysis of the transport accessibility of the object was carried out, as well as the analysis of the development site in conjunction with the existing relief for the purpose of determining the need to install retaining walls or to organize natural slopes. Preliminary calculations of the earthworks volume were made.

The automobile tunnel, built at the intersection of Kalinin-Lenin Streets, will allow to divide traffic flows, thereby making traffic safe and non-stop, which means more convenient and high-speed. The tunnel construction is supposed to be done in an open way using the "slurry wall" method or sheet pile and pile fences of foundation pits (which are part of the permanent structures) at a depth of 25 meters, two lanes in one direction. The route will be located within the existing Kalinin Street. In road tunnels niches may, if necessary, be provided only for the location of technological equipment.

To reduce the load on the heat supply, it was proposed to use the heat recovery of the exhaust air, which would make it possible to achieve utilization efficiency of up to 80%. Calculations were made for an efficient building facade and requirements for the facade designer were prepared. It was proposed to use exhaust office air for ventilation of the parking lot. The use of the waste heat from the cooling system is proposed for heating the building and heating the water, which will lead to significant energy savings. Measures to reduce the load on the power supply also included systems of highly efficient refrigeration machines for central refrigeration, efficient lighting. 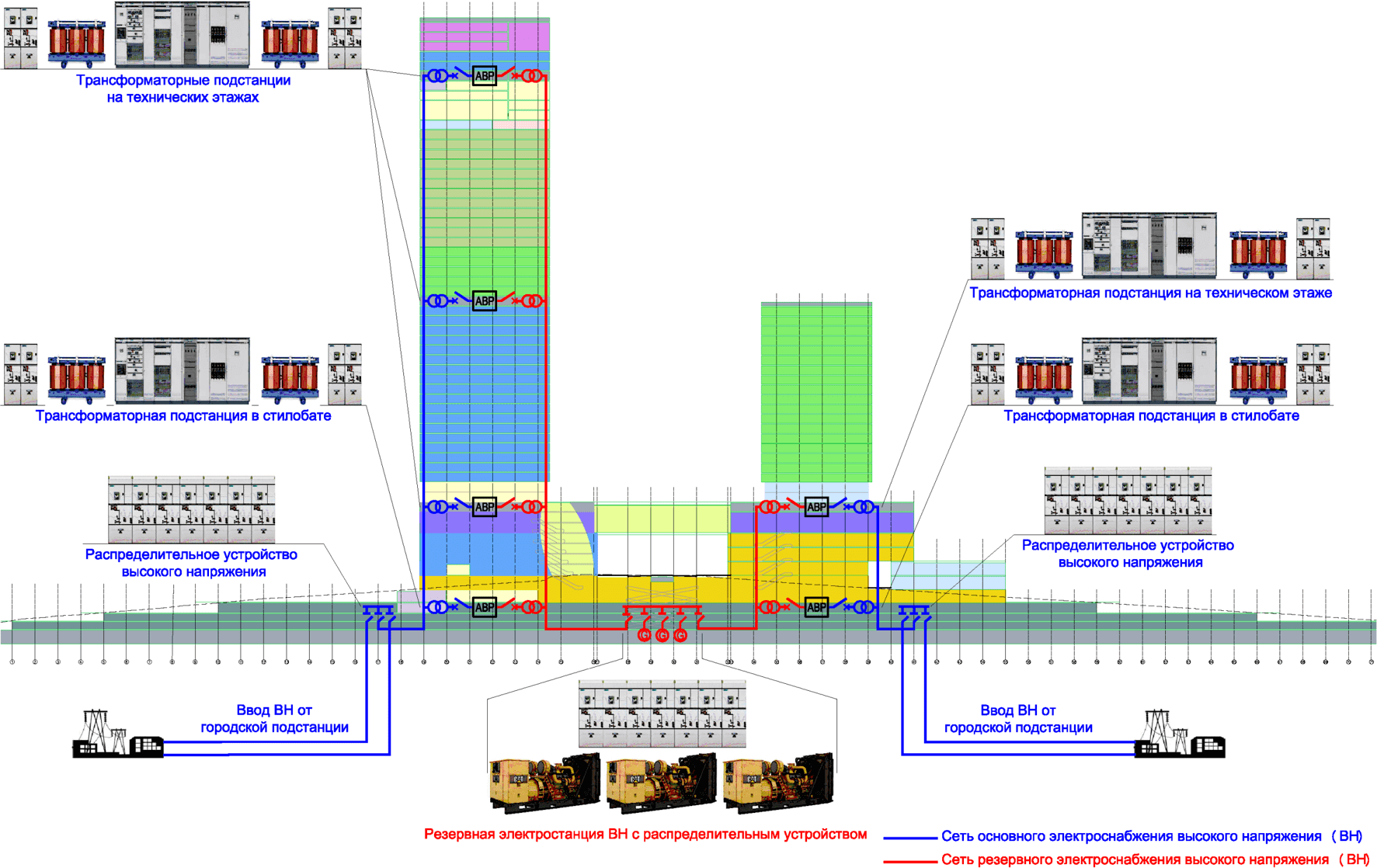 Clancy Engineering team was in active cooperation with architects, a vertical transport consultant and a fire safety consultant in order to formulate a set of tasks that make up the process of vertical transport and determine the impact on the dimensions and proportions of the building core.

Several variants of the technology for the construction of the underground part of the multifunctional center were worked out, taking into account dense urban development. Variants of the foundation types were presented.

Several options for the implementation of the underground part of the building were considered:

The recommended types of pit fencing are a slurry wall or a bored pile wall.
In this case various types of spacing systems can be used

Variants of structural schemes of the main bearing frames of the Object were proposed, the data collection of the main loads, including vertical, wind and seismic effects, as well as preliminary mathematical modeling of the supporting frame of the skyscraper were carried out. 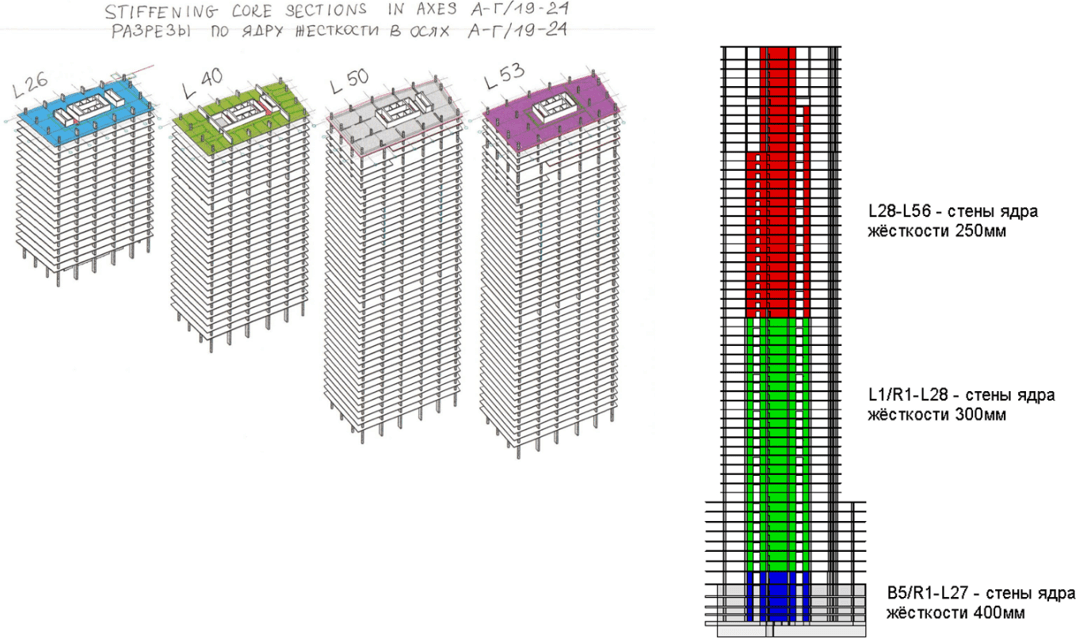 Рiс. 5   Change of the configuration of the core stiffness in height

The assessment of the efficiency of the elements of the skyscraper structural scheme (core of stiffness, perimeter frames, outriggers) was carried out, in order to find their optimal location in accordance with the architectural concept. The general dynamic behavior of the building was analyzed and the requirements for the parameters of the comfort of stay were determined.

The main parameters of assignments for scientific and technical support, engineering and geological surveys, tests in a wind tunnel were prepared in cooperation with the Client.